This was the second HALI tour to Transylvania, led by Stefano Ionescu and by HALI senior Editor Daniel Shaffer. Here are some impressions from two of the participants: Stephanie Douglas and Louise Broadhurst, (both standing in the group photo at St Margaret’s Church in Mediaș): 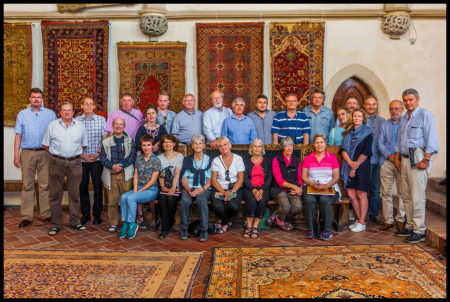 I was conscious that due to their prestige they were historically hung on the whitewashed walls, with some used on and over the pews which would explain why some are fragmentary or damaged, yet they are all precious survivors and integral to the collection as each piece contributes to the comprehensive group represented. The St Margaret’s collection is a quintessential group of Transylvanian rugs, including the Selendi group, ‘Holbein’, ‘Lotto’ rugs, with their ‘Kufic’ inspired border, along with the single and double niche rugs and it was an invaluable opportunity to have been able to see many pieces in such close proximity, and to see several of the same group together and review the different field and border designs and scale used. In addition we had three fragmentary pieces unrolled for us to see, including another ‘Holbein’, with blue field, and two ‘Lotto’ fragments (one with stunning repeat pattern of rosette motifs in hexagons in the borders) which was a further opportunity to see pieces close up, and marvel at the gorgeous colours, including shades of coral and salmon pink and full pile where it was extant.

There are few places where you are able see a wall with rare Selendi white ground ‘cintamani’, ‘Scorpion’ and ‘Bird’ rugs, and be in a position to see the overall designs next to each other. Then have the opportunity to be able to concentrate on the intricacies of the weave, see the pile still full in places, the subtlety of the gorgeous pastel colours used with the scorpion and bird motifs against the creamy ground, the accents of the now oxidised dark brown/black of the ‘cintamani’ motifs, the foundation structure and the rarely seen original flat weave ends and original side-cords. The ‘Holbein’ pieces hanging along the choir parapet were extraordinary. Seeing one alone is rare and to see complete 15th and 16th century examples in such good condition, and to be able to compare the designs and the madder and the dark green grounds, was a fascinating experience.

It was contemplative to see so many precious pieces hanging quite naturally in a ‘hallowed space’, generally in shadow, not behind glass, without being star lit and with hints of light from windows and electrical lights spotted around, often at height around the church. Having had the initial impression of seeing them all together and then been able to observe them in close proximity I will have in my mind’s eye the still gorgeous colours and the contours of the drawing and pile in detail. It was a privilege to have this opportunity.

What struck me immediately about St. Margaret’s church in Mediaș, was not just the rather worrying angle at which its tower is leaning and the gleaming green ceramic tiles that decorate its steeple, but the way in which it is encircled by the life and community of this historic town nestled in the beautiful Târnava Mare valley. This vitality continues inside the church where, upon entering the cool interior, I was greeted with the sound of the local children as they sang in their school graduation, seemingly unaware of their spectacular surroundings. As with so many of the Lutheran churches in Transylvania, the exuberance of much of its frescoed interior was disguised after the Reformation by a thick layer of white wash. In order to enliven the interior the parishioners began in the 17th century to decorate the walls with the richly coloured Ottoman rugs that had made their way to Transylvania and were gifted as pious donations, but which also served as practical pew covers for the colder months of the year.

Moving away from the more formal atmosphere and ordered display of the collection of rugs at the Black Church in Brasov, here in Medias, the church wardens allow a much closer inspection and a more personal encounter. Photographs are permitted and an examination can be made of the reverse of those rugs at eye level, allowing a technical analysis of the weave and structure. In the Black Church there is a very impressive display on either side of the nave of over twenty ‘Transylvanian’ single and double niche rugs that have an ordered symmetry in their presentation, but are displayed at such a great height that one cannot really appreciate their colour or design. This is very different from the more informal display in St. Margaret’s, where the rugs are hung in various directions so as to fit with the geometry of its interior. This is well illustrated towards the rear of the nave where a wonderful ‘Holbein’ carpet and three ‘Lotto’ rugs are hung laterally beneath the main organ, so as to fit the width of the balcony. The ‘Holbein’ carpet, with its forest-green field hosts a myriad of sculptural arabesques and small flowerheads that gracefully intertwine with one another forming a complex lattice which is enclosed by a unique variation of a kufic border. This border design is arranged with paired minor inverted scrolling bars which form links, as in a chain, between each of the larger ornamental boxed right-angled motifs that seemingly wish to break-out of the constraints of the border.

To either side of the main altar, clinging to the white-washed walls, there is a busy display of rugs of all types jostling for space above the choristers pews. To the right hand side of the altar I was struck by the flock of ‘Bird’ rugs that are interspersed with an equal number of white ground Selendi prayer rugs. Further ‘Bird’ rugs are mirrored on the opposing wall but are accompanied by a ‘Scorpion’ rug, a ‘Lotto’, a ‘Small Pattern Holbein’ and other remarkable Ottoman prayer rugs. At the far end of this same wall, nearest the windows, hangs a perfectly formed ‘Transylvanian’ single-niche rug with a star and cartouche border, arabesque spandrels and reciprocal-trefoil outer minor stripe. This combination of design elements places it quite clearly within the small number of existing ‘Transylvanian’ ‘first-period’ rugs, as classified by Michael Franses.

The church of St Margaret’s undoubtedly holds an impressive collection, much of which is on display, but we were fortunate to be shown three additional fragmentary examples of note which are not widely available to the public. These included two ‘Lotto’ rugs; one of cartouche border design, the other with squared panels centred by a single bold petalled flowerhead, and a ‘Small Pattern Holbein’. Although all three are very fragmentary, each retained a magnificent depth and freshness of colour. This continued saturation of colour is almost certainly due to their lack of exposure to prolonged periods of natural daylight, and illustrates how important it is that those rugs which are on permanent display are exhibited on a rotational basis in order that their fugitive colours are not diminished.

Instigated by Stefano Ionescu and supported by the Church, efforts continue to preserve these works of art which include the introduction of a programme of reproductions of which two are already in place. The replica of the original late 16th century West Anatolian Animal carpet, that once belonged to the parish of Medias but whose whereabouts is now unknown, hangs beneath the reproduction of a cintamani prayer rug that was donated by the Asociatie Culturale Cintamani, Pordenone, Italy. It is only through dedicated programmes such as this that these rare time-capsule collections within Transylvania will be preserved for centuries to come.